The third devopsdays Minneapolis, held July 20-21 2016 at the Hilton Minneapolis, was a balancing act between explosive growth and continuing what worked from 2014 and 2015. We’re delighted to let you know that the survey results seem to indicate that participants liked it!

We had about 700 people attend the event. (For comparison, 2015 had about 350 and 2014 had about 250.) 133 people filled out the post-event survey. (30.8% were also at devopsdays MSP 2015 and 15.8% at devopsdays MSP 2014.) Every year we have between 8% and 11% of registered attendees not show up. This year the attrition was closer to 8%, probably because we offered full refunds until the final weekend before the event; the official registration total was 763 people. 88.6% of survey respondents said they live and/or work in the greater Twin Cities area. 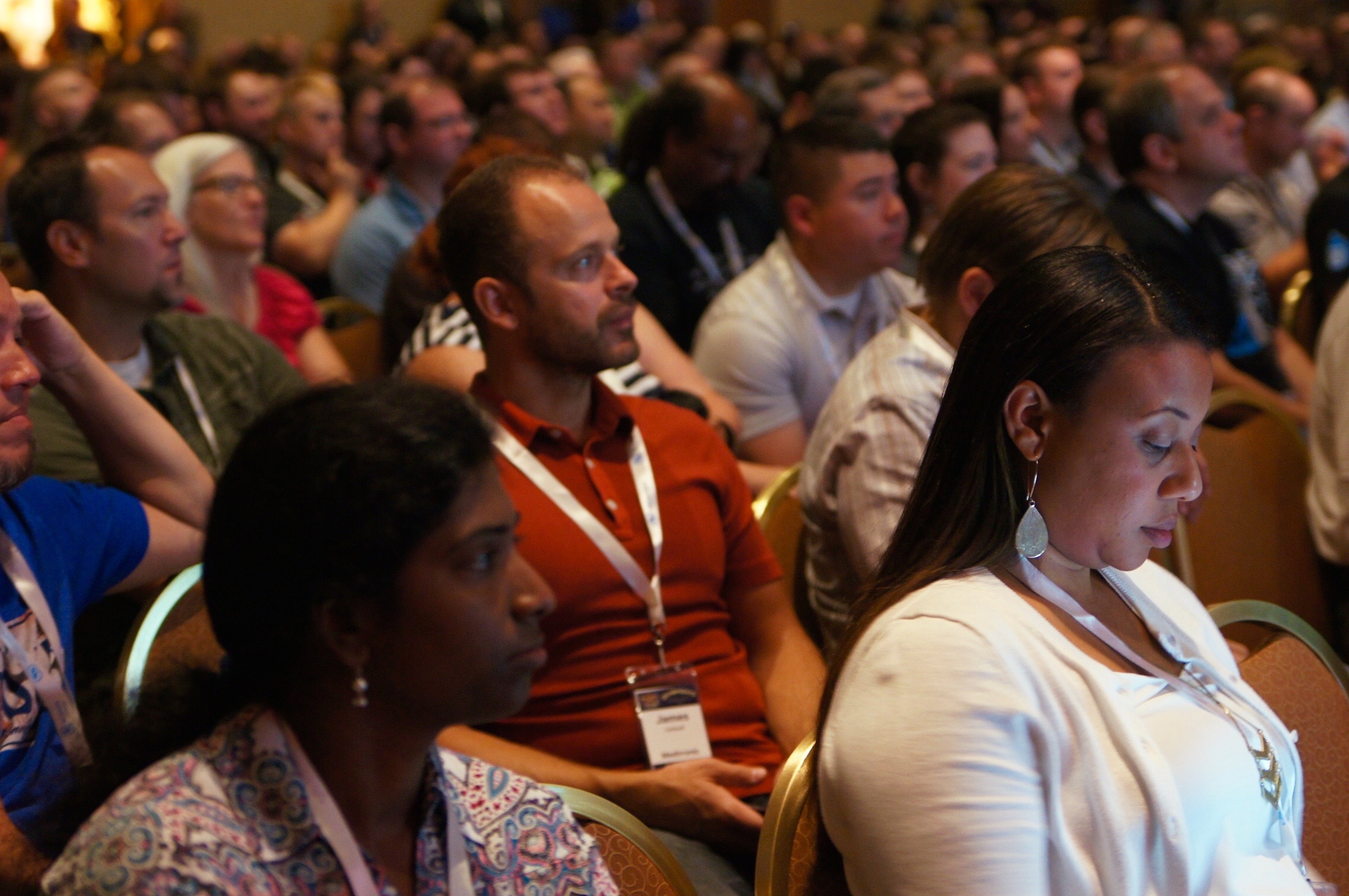 Diversity and inclusion are important to the organizers, and many attendees said that was their favorite thing about the conference (in person, on Twitter, and in the survey). Of those who replied to the survey, 29% considered themselves to be members of a group under-represented in technology. We estimate that about 18.4% of those attending the conference were women. As for the demographics of our speakers, we featured 58.8% women speakers with 62.5% women presenting the 30-minute sessions; 35.3% of all speakers were people of color with 25% of the 30-minute sessions presented by people of color. We’re thrilled at what great talks everyone gave, and since Joe Laha turned the videos around quickly, you can watch them and see for yourself! 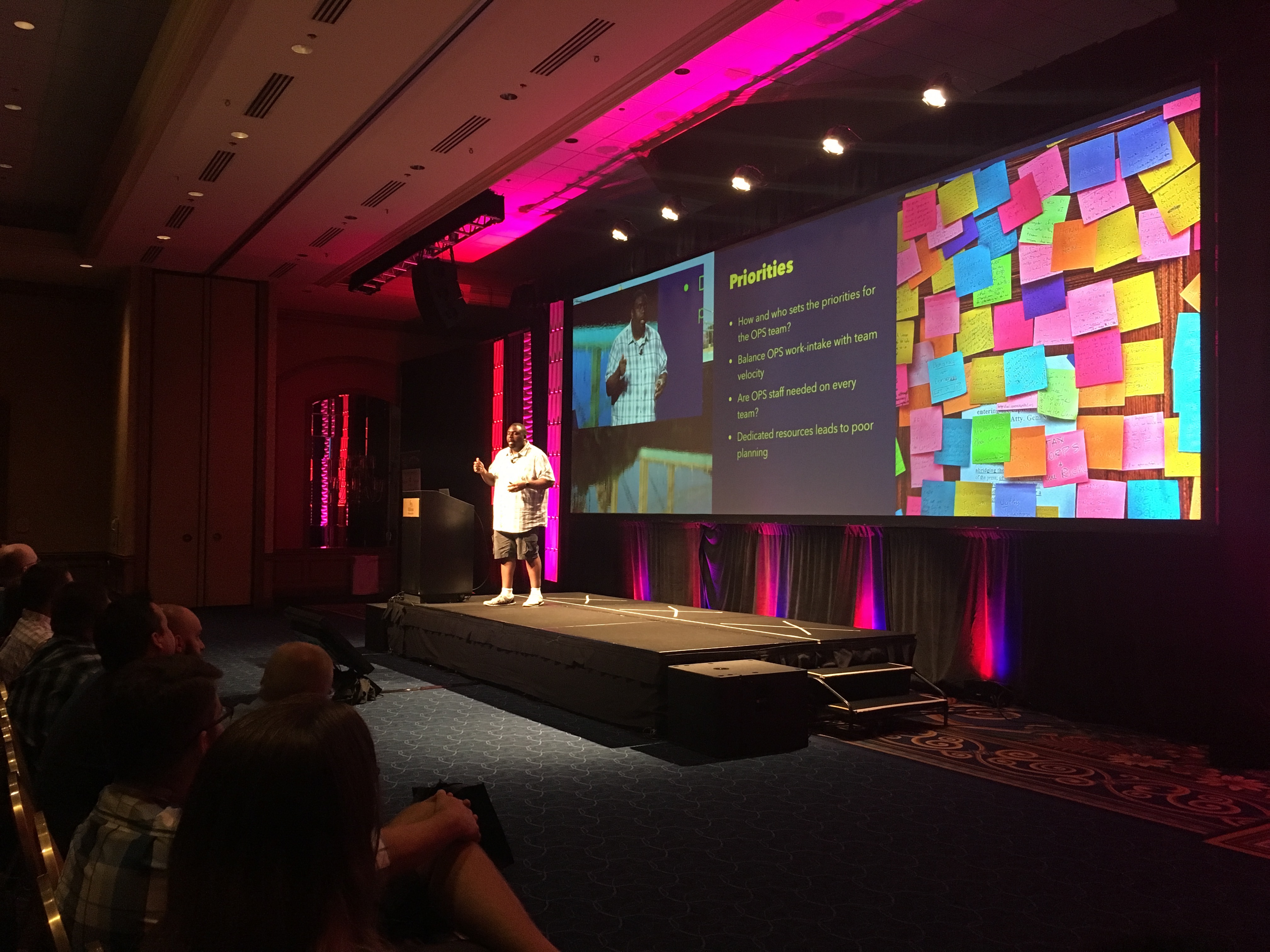 Top-rated aspects of the event (liked very much or liked somewhat) included audiovisual technology (90.9%), [morning 30-minute presentations](http://www.devopsdays.org/events/2016-minneapolis/program/) (88%), venue (87.2%), organizer communication (86.5%), sponsor presence (84.9%), and the at-conference registration & information desk (82.8%). Overall, negative ratings (strong and moderate combined) ranged from 1%-5%, except the Open Space attendee-driven discussions, which at 11.3% dislikes encourages us to keep iterating. (Open Space worked for 69.9% of survey respondents, but not for everyone...although for those who did like it, it was frequently their one favorite thing about the conference!)

Another area that needs improvement is adjusting our layout to reduce crowding. We don’t want the situation we had in 2015 with over 100 people waitlisted and unable to join us, so we’re going to work with the venue for 2017 to ensure a more spacious setup with a bit more elbow room (and to ensure we don’t have periodic shortages of food/drink!) The hotel informs us they plan renovations before this time next year, including more-comfortable chairs.

The organizer team said goodbye this year to Tom Duffield, who moved out of town; Samantha Grumdahl stepped in to take over as sponsor coordinator. With 35 sponsors having tables and many of those having pitch slots between conference talks, there was plenty to juggle! Sponsors ranged from vendors and consultants in this space looking to connect with clients and prospects to local employers looking to meet community members. Laura Wickett of Conference Ops continued to keep our finances running smoothly. 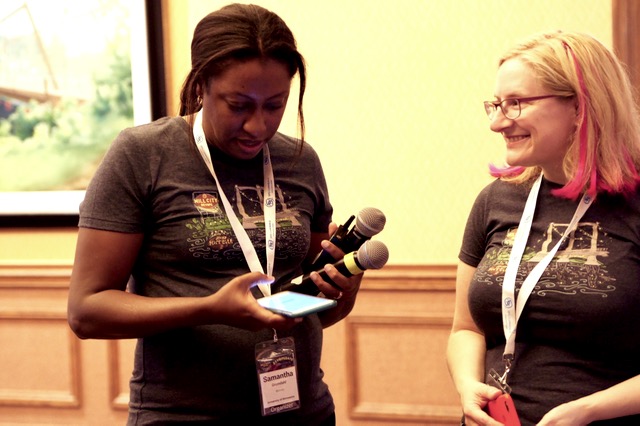 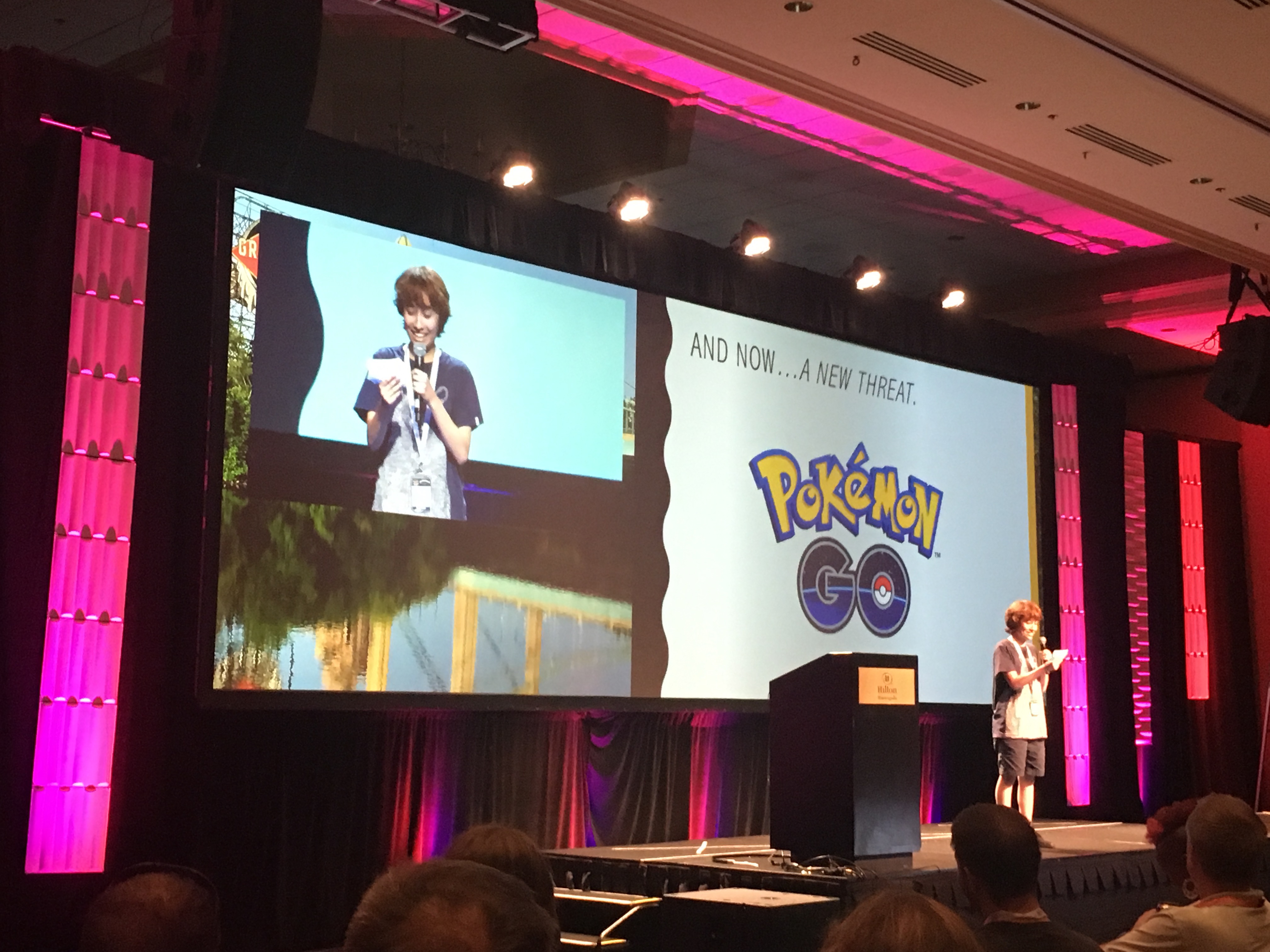 Tracey Treat presenting
Photo by Bridget Kromhout
Although only about half those surveyed made it to the Ignite talks, those who attended rated them at 93% positive! About a third of survey respondents didn’t make it to the Wednesday happy hour either, and the most common request is to make those parts of the program start earlier. We’ll keep iterating on the evening event to make it work well for as many folks as feasible.

As is typical with devopsdays, many people found the content to match their needs well, while some wanted more technical content or more culture/process content. A few responses highlighted the casual environment (both pro and con). We intend to keep a conversational style and informal tone, as there exist plenty of more corporate conferences. We do not directly control the content of presentations, but we will continue to select talks similar to those we’ve featured all three years of this event. As there is video available for all three years (2016, 2015, 2014), it should be possible for future attendees to decide if this event is right for them. It’s also a great idea to submit talk proposals when our 2017 CFP opens, and suggesting topics at Open Space allows you to discuss exactly what you’d prefer! (If you need ideas, our community sponsor O’Reilly offers a free Ebook to inspire and enlighten.)

Blog posts that came out of devopsdays Minneapolis 2016 include these:

And as has become a tradition, we did a “live studio audience” recording of Arrested DevOps.

The most common ways people hear about the conference (other than previously attending) are through work or a colleague (45.1%), the devops MSP meetup (17.3%), the devopsdays.org website (17.3%), or friends (16.5%). With 87.2% of attendees very likely or likely to recommend this conference to a friend or colleague, we anticipate having a large event again in 2017. (We’ll let you know when we set the dates! Until then, enjoy these photos from 2016.)

Thank you all so much for co-creating this experience! See you on Slack and at the local devops meetup! 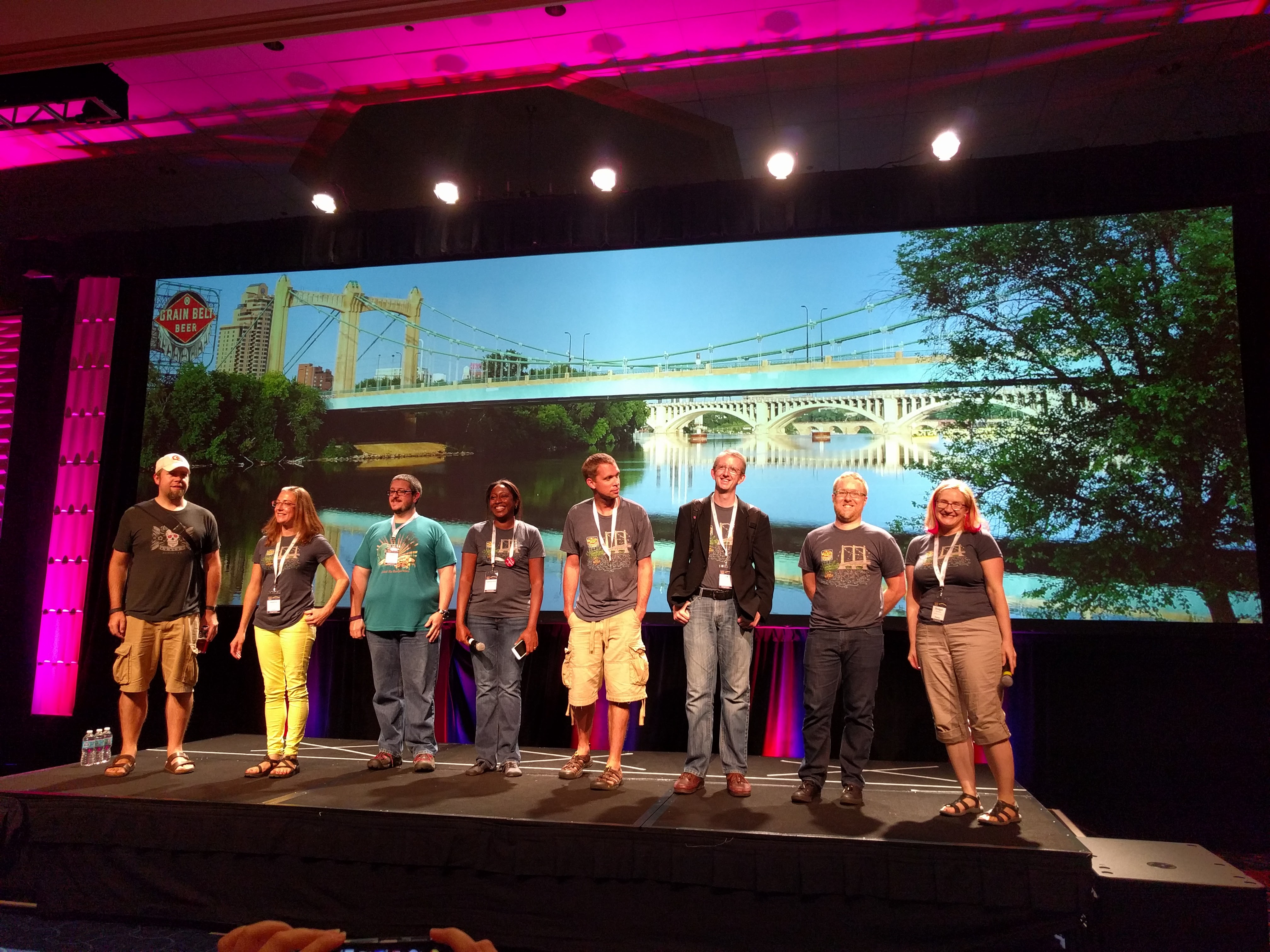 Photo by Ben Zvan
ALL EVENTS